After 18 years selling residential real estate I thought I had seen it all, or at least most of it. During the spring market this year I received the most offers I have ever received on a listing, 4 times in a row. The first was a 2-family in West Roxbury. Listed at $469,000, we scheduled a public open house for Sunday, and indicated that offers were due the coming Tuesday night. We had 60 people at the open house, received 12 offers, and are scheduled to close soon for well into the mid $500s. The winning bidder had no mortgage contingency. Next was a very cute and somewhat diminutive house in Natick listed at $359,000. It looked great, we had over 50 people come to the open house, received 9 offers, and sold it for $378,000 after deducting a fairly big sum for a failing porch. The third was a very nice, but dated, 2+bd/1 ½ bath condo in Cambridge priced at $549,000. This time we received 8 offers, with the winning bidder willing to pay a bit over $600,000 and no mortgage contingency. The last one was a mint condition 2bd/2 bath condominium in Allston/Brighton with garage parking built in 2007 and priced at $479,00. We only received 5 offers this time and are selling it for around $500,000.

If you have read the news or talked to other people in the industry I am sure you know that this kind of thing has been happening all the time and is continuing to happen. So what’s going on? I think there are 2 main reasons for the feeding frenzy of this recent spring market. The first and foremost is low inventory. Take a look at this graph showing the inventory  for the condominium market of the Back Bay, South End, and Beacon Hill combined. Other highly desirable neighborhoods around Boston  have similar statistics.

The decline year over year from 2012 to 2013 reaches as high as about 33%. Going back 2 years, the inventory is down in the range of 45-50%. In short, inventory has been declining for some time.  This year interest rates also hit an historical low at the beginning of the year.  See below. 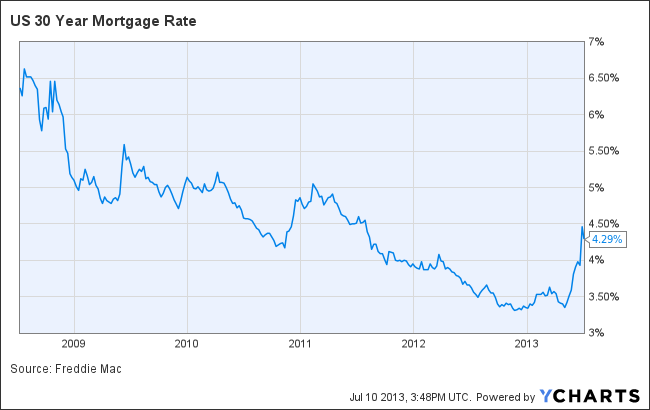 I think it is fair to conclude that this spring there was the widespread perception that interest rates were probably as low as they would ever go. This made borrowing  inexpensive, and naturally increased the impetus for people to want to buy homes. The lowest rates ever, combined with the widespread knowledge that inventory was low, created a perfect storm of high demand and low supply. The result has been the consistent scenario of multiple offers and prices shooting up so widespread this past spring. Now with interest rates going up, it will be interesting to see what happens this summer and fall.

The number of single family homes sold in Massachusetts last year rose by 18.4% compared to 2011, and the median price point rose 1.8%. The number of condominium sales rose 25% and the median price went up 2.6%. For the Greater Boston Area, the numbers were even better.  The single family median home price went up 6.8%, and for condominiums it was up 10.3%. With numbers like these, it is clear that the market has hit bottom and values are recovering. In addition, towards the end of the year the numbers were even stronger, with December posting the 2nd highest number of sales on record in Greater Boston for a December.

At the same time, the rental market is also experiencing a boom. Rents in the Boston area began to show signs of upward movement last year. This year, the rental market is off to a very strong start and I believe that we will see a further increase in rents. A rental agent I work with recently remarked to me that this kind of market “only comes around about once every 15 years.”

The immediate cause of the upward pressure on prices in the local housing market is the pronounced lack of sales inventory. Based on MLS data, the early February residential sales inventory for the downtown Boston neighborhoods for the past few years is as follows:

Statistically, the situation is similar in most of eastern Massachusetts.  Almost all the real estate agents that I speak with regularly report that demand is substantial, and the “squeeze” is creating a situation where prices are rising fast.  There is no consensus, however, as to the reason for the dramatic reduction in inventory. In my opinion, we are in a market-wide catch-22 “gridlock” situation. Those potential sellers who would like to move locally don’t see much on the market to buy. Without the confidence that they can find a new place, they won’t  put their house on the market. Simply put, it isn’t a good time to sell because there is nowhere to go. The only people putting their homes on the market are those who are truly under real pressure to move. As the spring market is still just getting started, however, the situation may straighten itself out. On the other hand, it may not and we could just continue to see tight inventory leading to higher prices. Either way, we will find out.

Take a look at this month’s Keller Williams video newsletter

I am referring to your property boundaries of course! As an owner of a single or multi-family home knowing your property lines with certainty is essential in several situations.  First, you may need them to obtain a building permit if you want to build a fence, repave your driveway, put in a driveway, add an extension to your house, or build a new structure, like a garage, on your property. Second, it is also possible that when you sell your house, a prospective buyer may harbor these future ideas and want to know the true property lines before negotiating a final deal. And last, if you suspect that your neighbor’s fence or garage etc. may be encroaching on your property, a survey can protect you from a future claim of ‘adverse possession,’ where your neighbor claims he owns your property because, essentially, you never objected.

If you own a recently built or developed house, you might be lucky enough to find some surveyor pins (small metal or wood posts) near the corners of your property. If you cannot find those, you probably have a “plot plan” with your mortgage documents. These can be helpful, but be careful because they are not definitive. Your town or city zoning maps (usually available on-line), or the maps kept by your city or town’s assessor’s office (also available on-line), can also have helpful boundary information

To know your property lines with legal certainty, you need to hire a surveyor. For relatively simple projects, you can expect to pay about $1500 in the Boston area. Be aware that you cannot hire a surveyor to figure out just one property line (e.g. your driveway boundary). Once you hire a surveyor, he or she has to do the whole property.

If you have had a good experience with a surveyor please let me know, I am always interested in adding to my list of recommended professionals in real-estate related fields so I can recommend them to others!

After writing about enormous over-the-top penthouse condos in the city, I thought it might be nice to mention the other side of living in the city.

I have sold some pretty small (but still nice) homes in my time.  My personal record is a 330 square foot studio apartment at 56 Commonwealth Ave. in the heart of the Back Bay that I sold 3 times as follows!

A 340 square foot renovated studio on the third floor of 56 Comm. Ave. just sold for $281,000 in case you wondering how much it might cost you to own one of these babies today.

The most amazing micro-condo that I could find is in Hong Kong.  It is 344 square feet of hip environmentally friendly space that transforms through the use of sliding walls and slide-out furniture:

While I have never sold one of these, I recently learned that there is a new movement dedicated to living in exceptionally small houses.  These are not mobile homes but real houses that are typically between 100 and 130 square feet in size and are very often illegal because they are not even large enough to meet local building codes.  In Massachusetts, for example, a home that houses one person must have at least 150 square feet of habitable space.

For a fascinating and detailed discussion of tiny houses, check out this article from a recent New Yorker.

And if you still want more, go to Tinyhouseblog.com